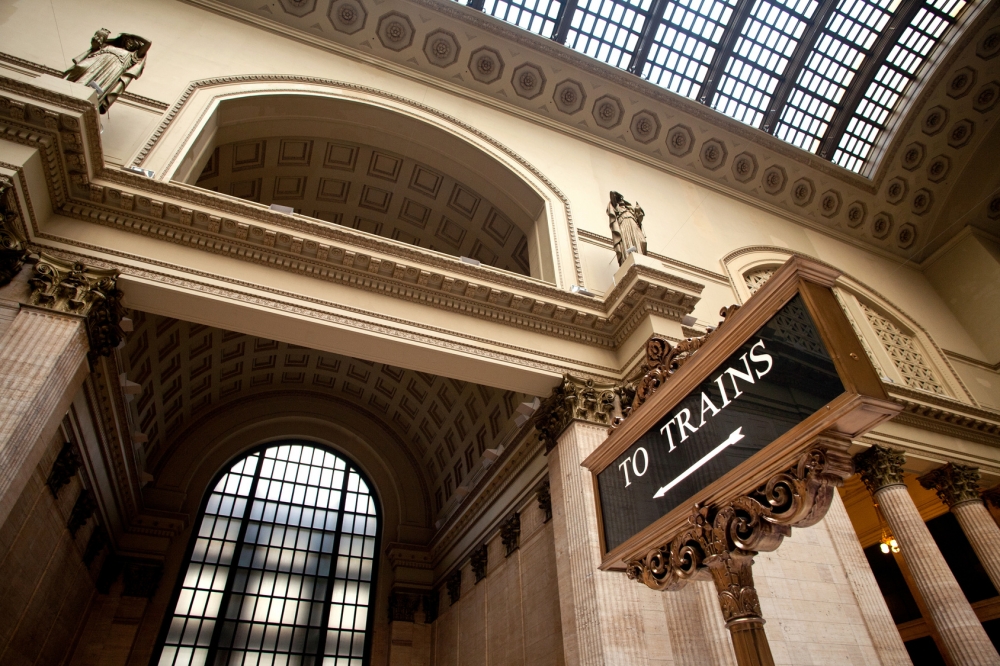 Let's put it this way: the majority of people who have ridden the California Zephyr rave about how incredible the scenery is. When you're on board, you'll see landscapes you'd never see from a plane or from the highway during a road trip. And I can attest to that. Recently, I returned from said 36-hour, 1608-mile train journey from Chicago to Salt Lake City. It was my first time on a long-distance, overnight train. The only other time I've stayed onboard a train longer than a couple of hours was a trip from Paris to Aix-en-Provence, which only took about three hours and 10 minutes. I had no idea what I was in for, regardless of the handful of reviews I'd read or videos I watched on YouTube. It was something that I had to experience for myself to truly understand and appreciate. 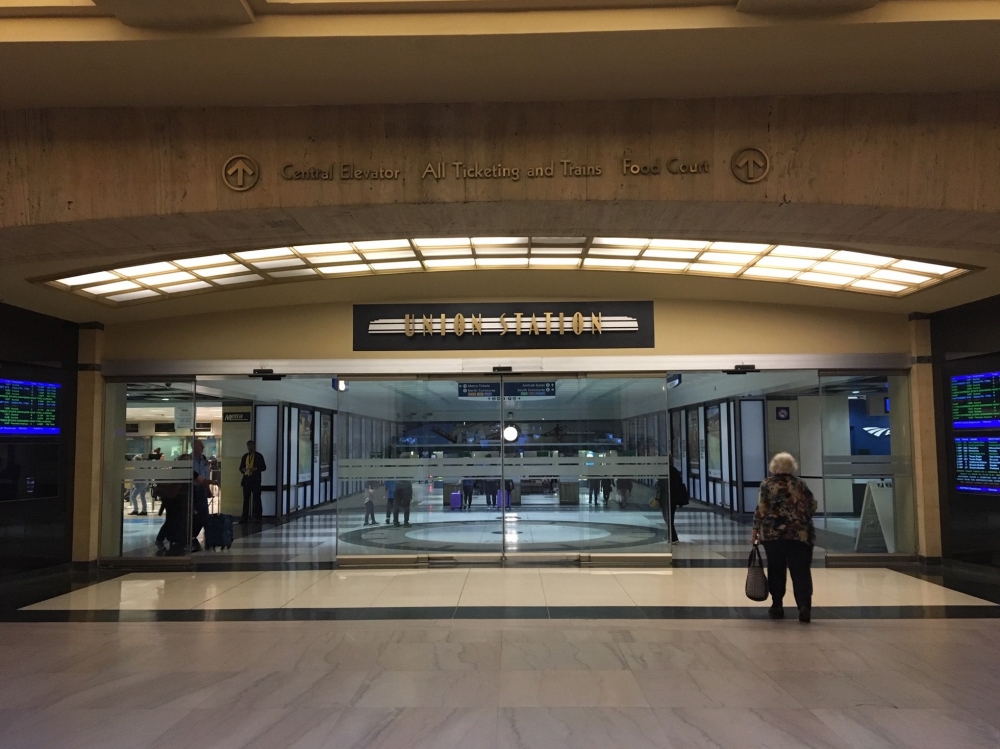 From the moment I stepped into Chicago's Union Station and walked into the Great Hall, I knew I was in for a treat. Even though the grand marble staircase was closed off due to renovation, the light-filled waiting area is a charming welcome. While you wait (unless you're a Sleeping car passenger and wish to wait in the Metropolitan Lounge), you'll find that it's also an excellent place to people watch. A Millennial couple huddled together alone on a bench staring into their cell phones, an elderly man and woman were being helped with their oxygen tanks, children played hide-and-go-seek behind their parents' luggage, an entire Amish family plays Yahtzee on a nearby table, and a flurry of other scenes unfolded throughout the morning. The Great Hall also features places to purchase ice-cold beer to go, restaurants, shops with snacks and souvenirs, and customer service kiosks. 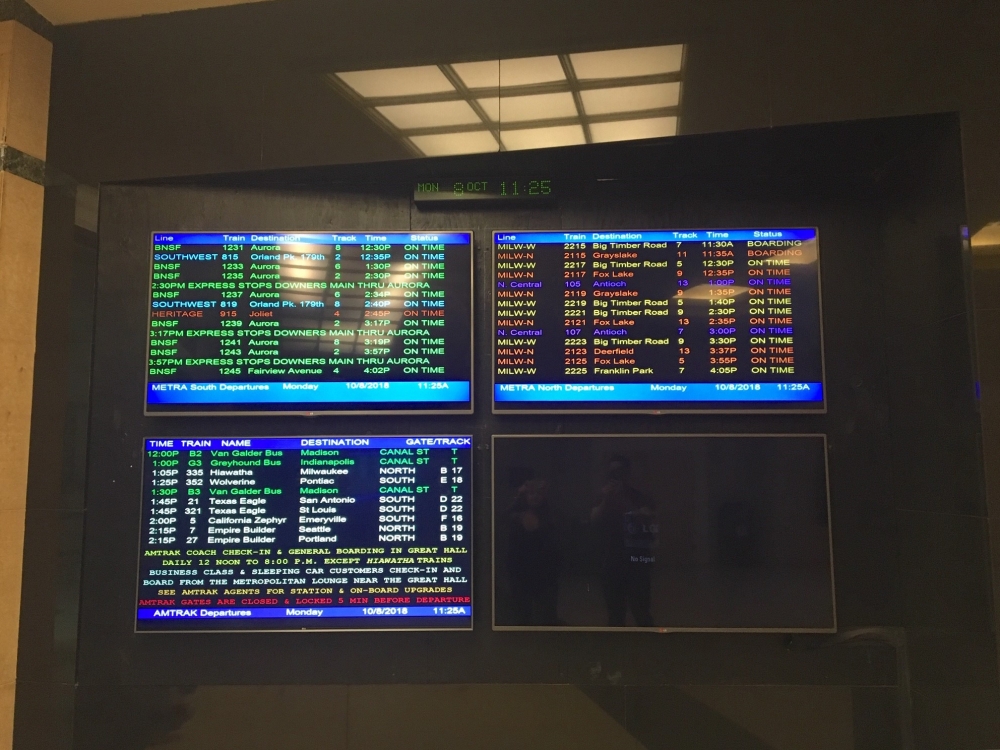 Chicago Union Station wasn't at all the madhouse that I head read about and was very easy to navigate.

Three things to remember while waiting to board your train are: A. Your Train Number, B. The name of the train you're taking i.e. California Zephyr, and C. Your train's ultimate destination. This won't just make it easier to know when you're supposed to board your train, but also which track it will be on, and whether it will be on time. Your train number will be written on your ticket, along with your destination and scheduled departure time.

Approximately 30-45 minutes before my train was scheduled to depart, video information screens marked “Amtrak Departures” displayed the departing gate and track number. There are also live announcements made in the waiting areas. If you are a senior citizen, active military, traveling with small children, or reserved sleeping accommodations, you're eligible for early boarding. 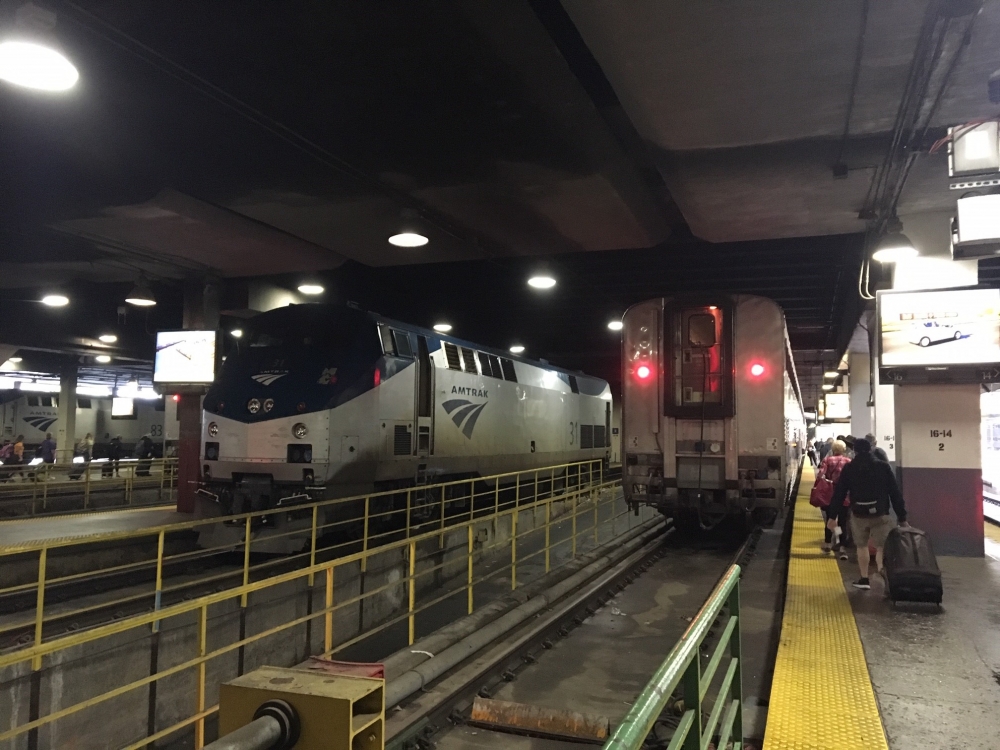 If you booked a Roomette or Bedroom in a Sleeping car, soon after the train leaves Chicago's Union Station your Sleeping Car Attendant will introduce him/herself, help you with your luggage (if needed), and reserve your seat in the Dining Car for dinner or arrange for your meal to be served in the privacy and comfort of your accommodation. Once getting all settled in, take some time to walk through the train and get familiar with all of the amenities, including the restrooms/showers, Dining Car, Sightseer Lounge and Cafe, and the Observation Car. You may even find yourself taking this time to get your rail legs (walking around on a train can be a surprising experience) and getting to know your Sleeping car neighbors and train staff. 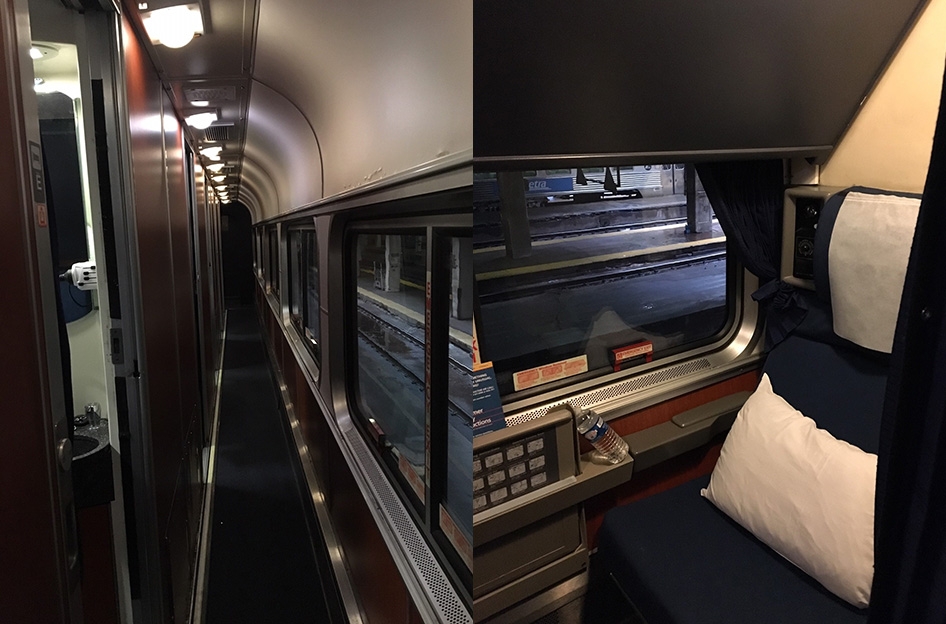 From your accommodation window or from the Observation Car, relax and enjoy the views as the train travels through Naperville, Princeton, and Galesburg, Illinois, before crossing the State Line into Iowa. 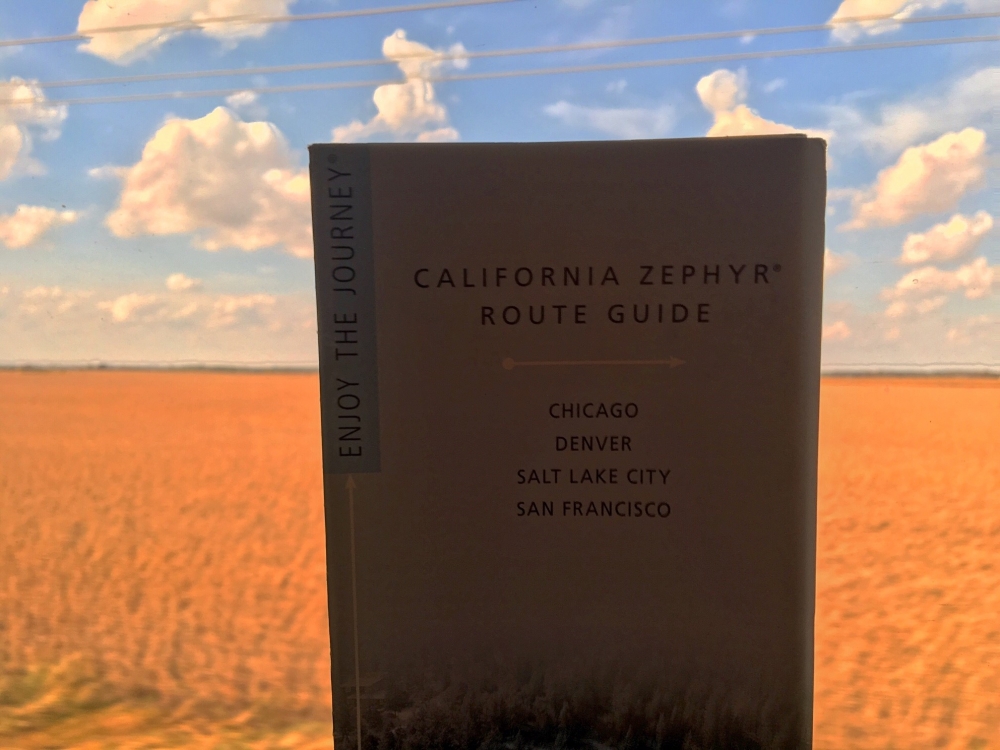 When it's time for dinner, the Lead Service Attendant will announce reservation times. That's when you'll head to the Dining Car and present the slip of paper with the reservation time and the number of people in your party. I chose a seating time of 5:30 p.m. and decided to dine solo from the group I was traveling with so I could have the chance to meet a few fellow passengers.

At the time, the dinner menu featured several options including Griddle Seared Norwegian Salmon, Thyme Roasted Chicken Breast, Butternut Squash Risotto, or The Amtrak Signature Steak. I selected the latter. The USDA Choice Black Angus was grilled to order (medium) and served with a side of Bearnaise sauce, a baked potato, and green beans. Of course, I ordered a half-bottle of wine to accompany the dish. To be honest, the steak was significantly better than what you could expect from an upscale steakhouse. No kidding! 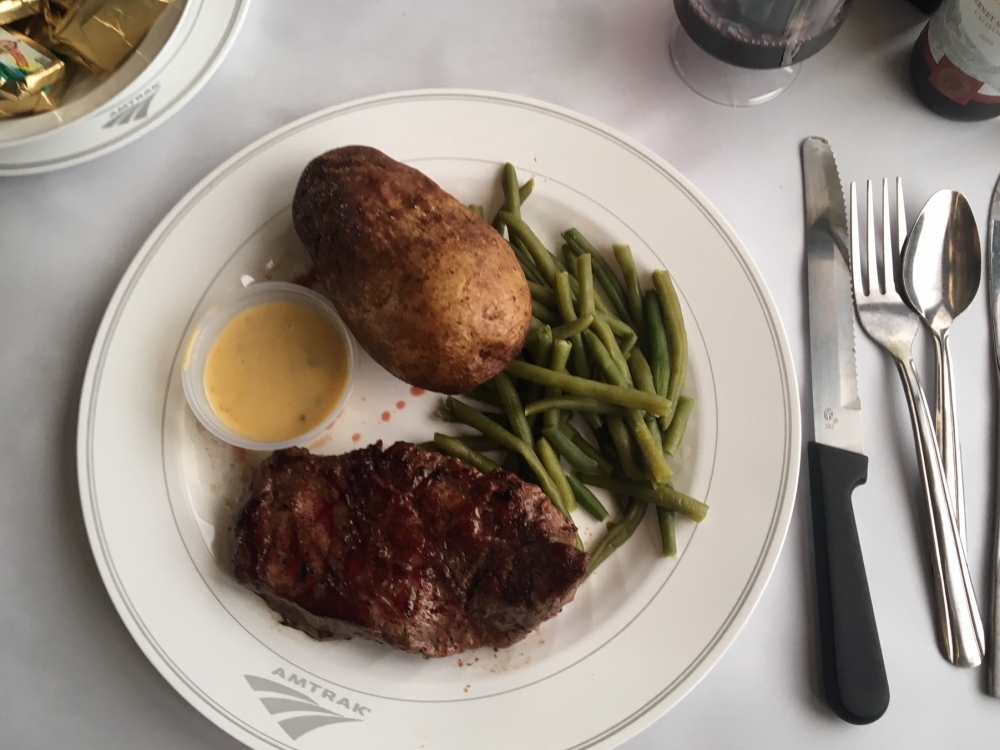 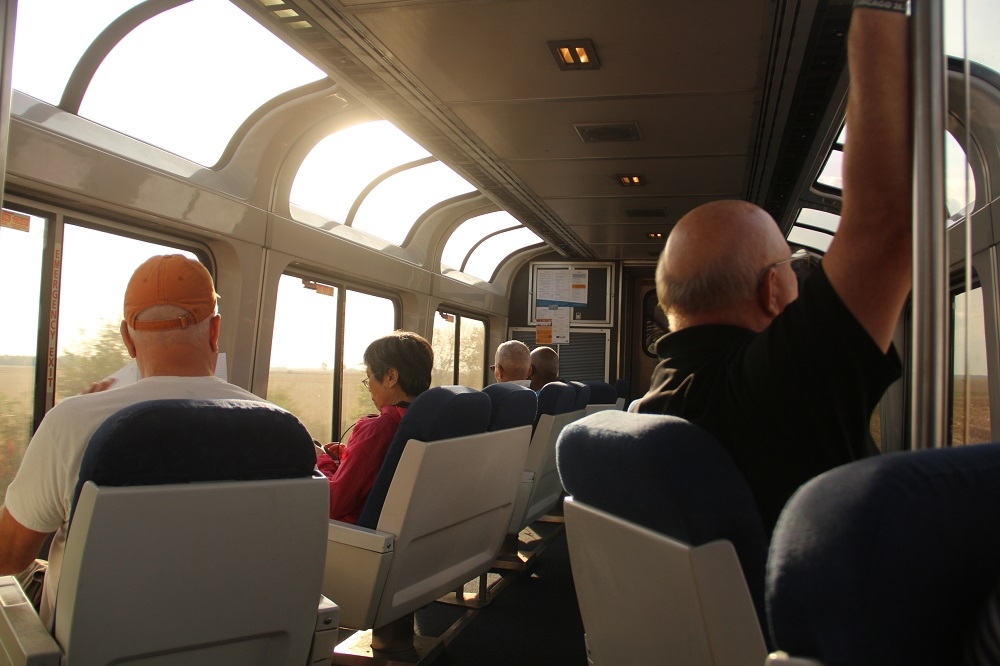 As I mentioned above, one of the great joys of dining onboard the train is getting to meet people from diverse backgrounds and hear their stories. I was very fortunate to be seated with some wonderful folks, including a young teacher from Sweden named Roger. He had just finished running the Chicago Marathon. Apparently, he travels all over the world to compete in various races. Then there was a woman named Bobbi who was on a solo cross-country "bucket list" adventure from New York City to San Francisco following a long period of caring for her elderly mother. She couldn't find anyone to join her so she decided to go it alone. Amazing, right? 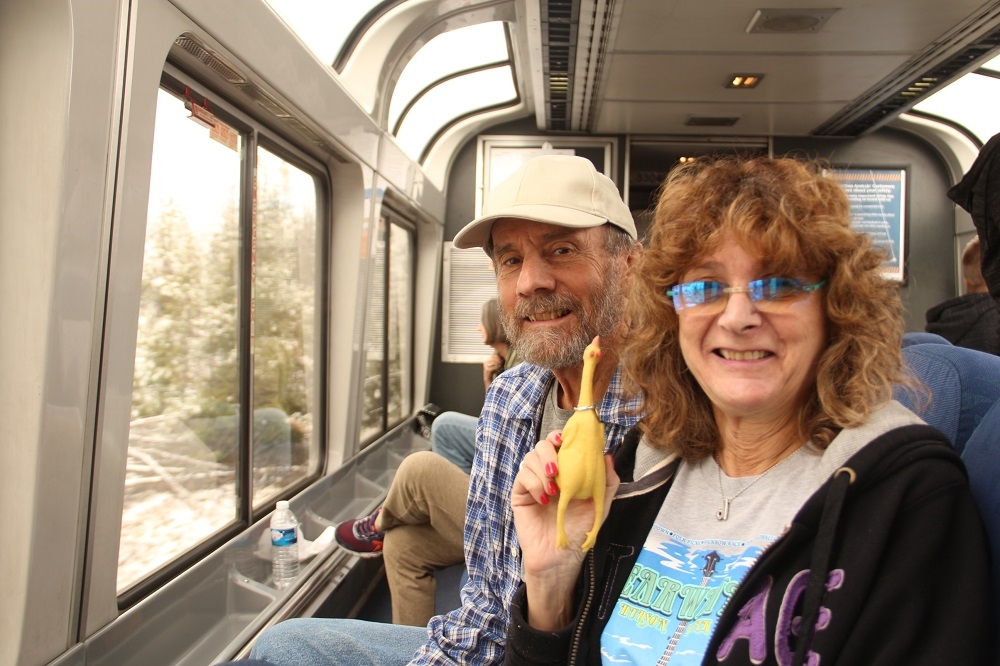 Even if you're not usually a fan of dining with strangers, it's interesting to hear the reasons why other passengers choose to travel by train. Following dinner and a short nap in my Roomette, I headed to the Observation Car with a book and a nightcap. By this time, it was pretty much empty, which meant a few hours of peaceful downtime. 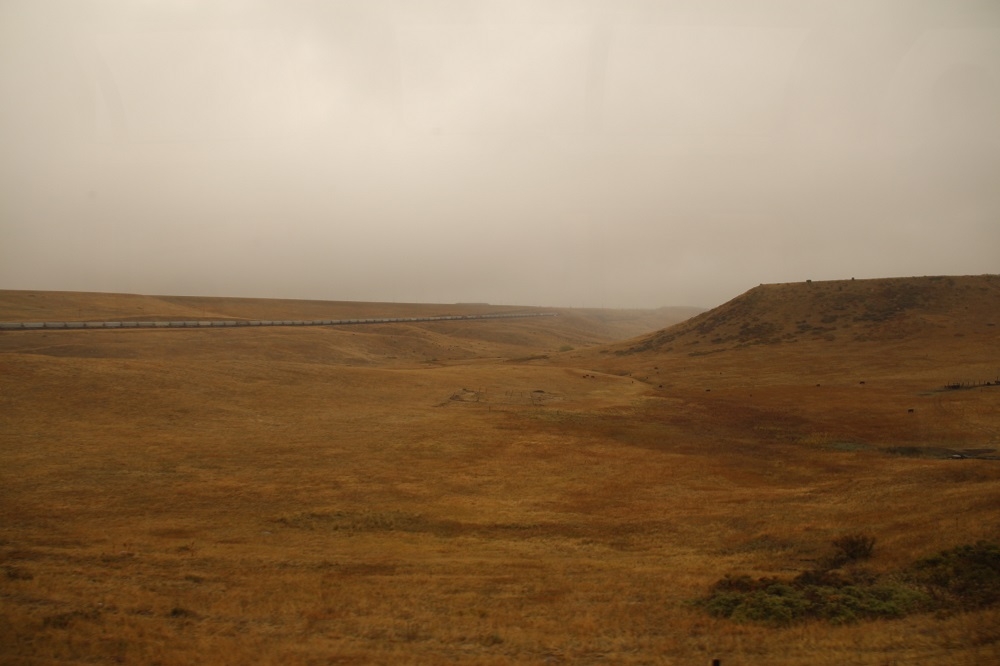 When I finally decided to turn in for the night, I returned to my accommodation to find that the attendant had converted my seats into a bed. I was surprised at how easy it was to fall asleep. I'm typically not someone who sleeps very well in planes or cars. However, after getting used to the constant motion and sound of the train horn, I was lulled slept like a baby. It was also pouring really hard that night, and the rain pattering on the glass only added to the ambiance. During the night, the train made its way through the farmlands of both Iowa and Nebraska. Station stops in Iowa include Burlington, Mount Pleasant, Ottumwa, Osceola, and Creston. When I woke up in the morning, the train was approaching Denver, Colorado. 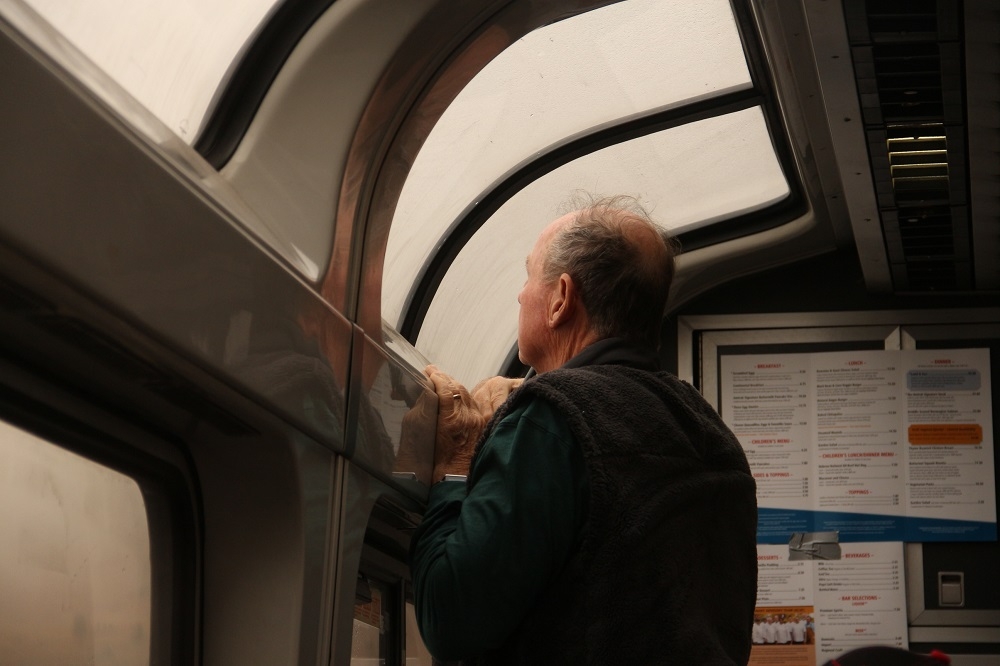 At around 6:00 a.m. the Lead Service Attendant made an announcement over the loudspeaker: “Good Morning passengers!” The Dining car is now open for breakfast. We will be serving….”  I had breakfast in the Dining Car alongside a couple who were Amtrak frequent riders and a father who was taking his teenage son on a post-high school adventure. I didn't stay at the table long after finishing my meal, as I wanted to lock down a seat in the Observation Car before they filled up. From the Observation Car, you can take in the vast expanse of the great plains as the train slowly climbs into the beautiful Colorado Rockies after leaving Denver Union Station. Between Denver and Winter Park, the train passes through 31 tunnels and offers landscape views that brought most conversations to a halt aside from "Ooohs" and "Aahs." The best part? It was a winter wonderland. 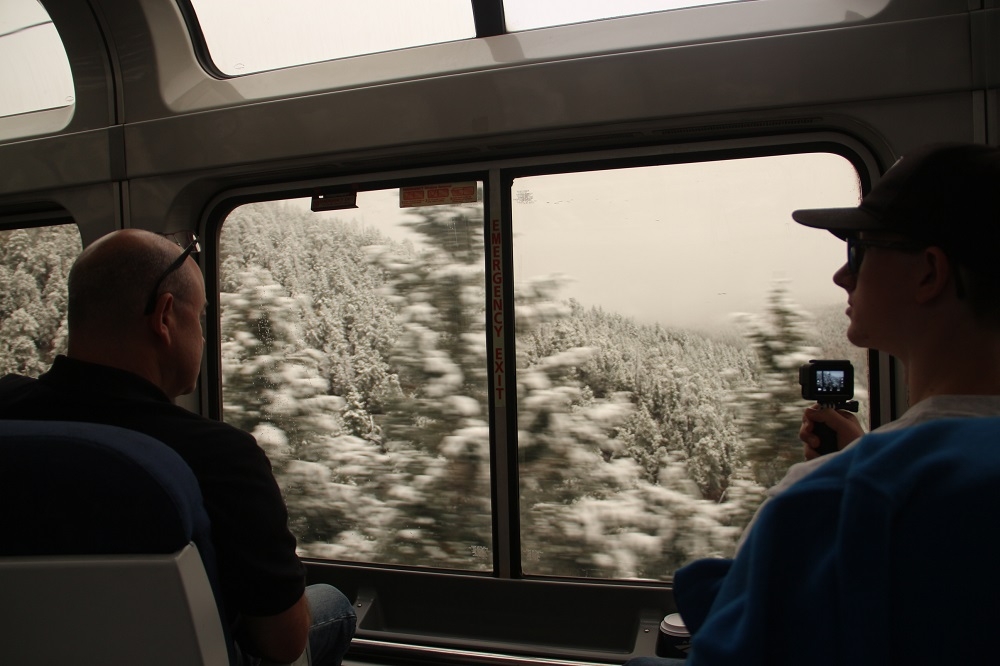 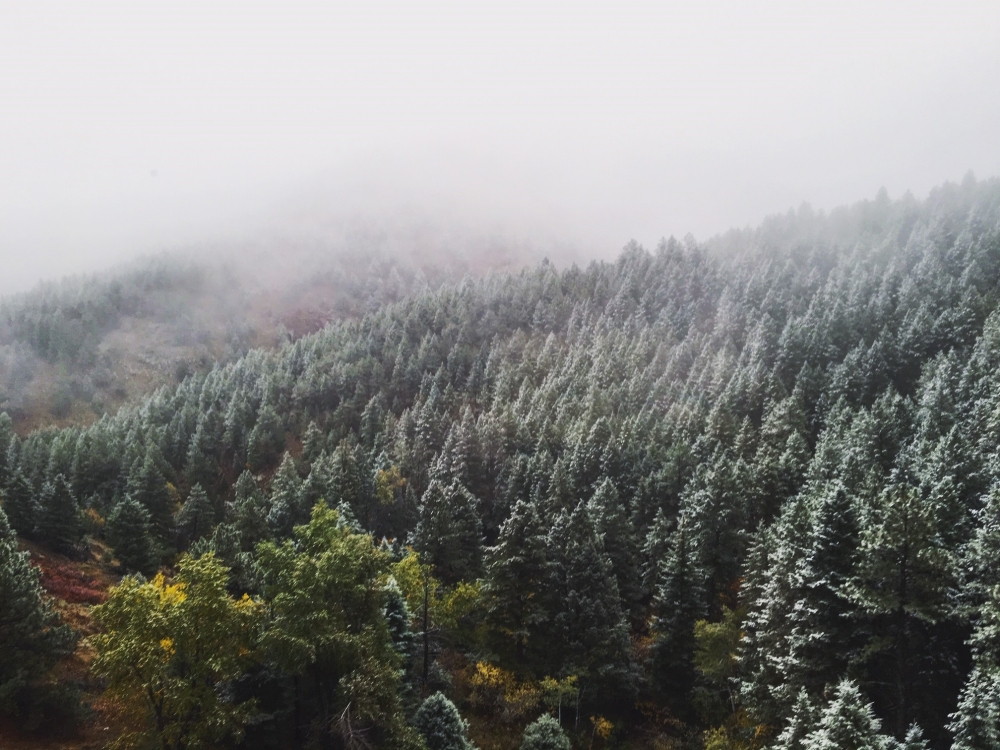 Before reaching Winter Park, we traveled 6.2 miles through the Moffat Tunnel and across the Continental Divide. Then, the train followed the Fraser River through Fraser Canyon en route to Granby, the gateway city to Rocky Mountain National Park. This is where the train begins paralleling the Colorado River for the next 235 miles off the left side of the train. Many passengers call this stretch of the California Zephyr route the most scenic. As you watch from the windows, you may find it hard to disagree. One of the highlights was slowly snaking through Glenwood Canyon, with its spectacular cliffs and fall foliage along the Colorado River. 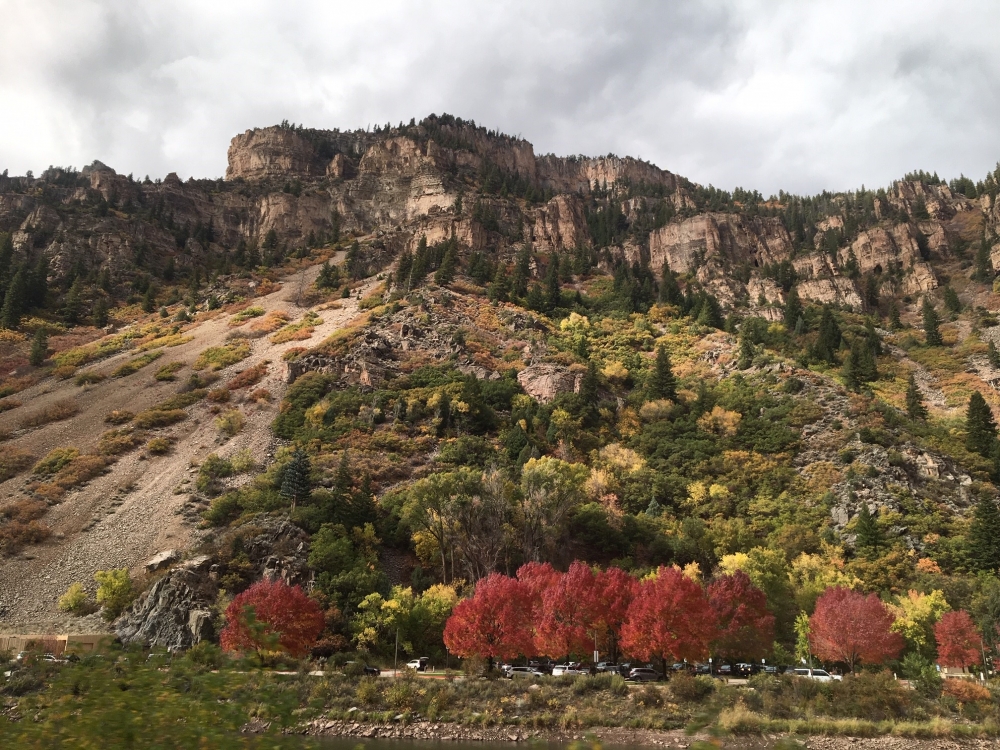 The train made frequents stops throughout the day and occasionally it would stop long enough for the passengers to get off and take a breath of fresh air. Back in my Roomette following lunch (I had the Natural Angus Burger with kettle chips), I relaxed as the train stopped in Grand Junction to let off and pick up more passengers before making its way into Utah. Today's highlights from the Observation Car were Ruby Canyon's striking red sandstone cliffs, vast views of Utah's Wasatch Mountains, and contrasting vivid hues of the landscape. 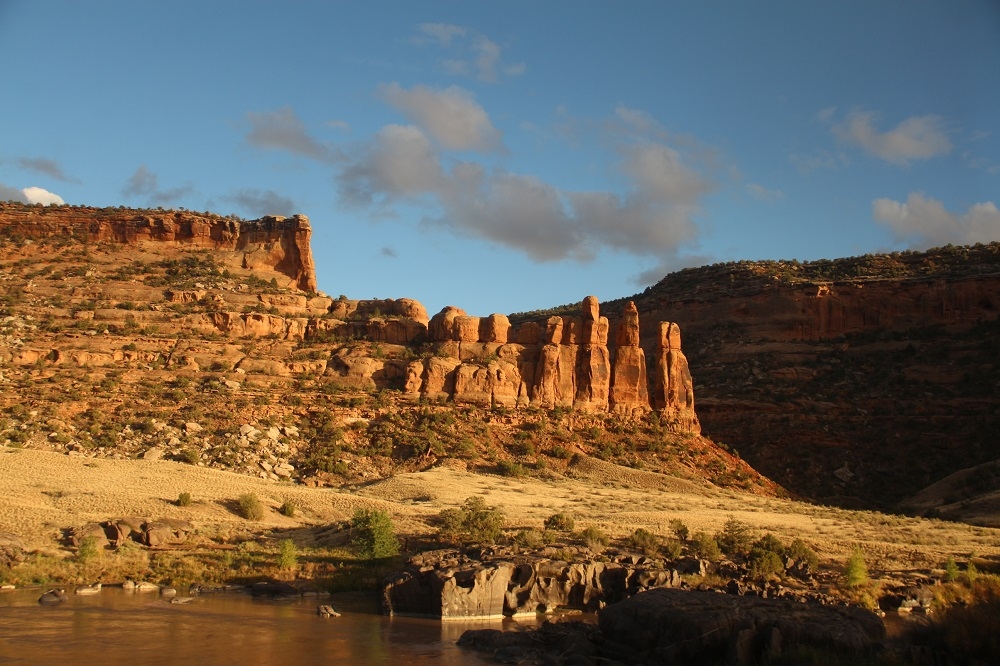 Prior to arriving in Salt Lake City, I shared one last dinner, a bottle of wine, and memorable conversations with some lovely strangers. I'd say that was 36-hours well spent. Once in Salt Lake City, we took our transfer to West Yellowstone and explored Yellowstone National Park. We'll save those adventures for our next blog.

5 Reasons to Travel by Train During Your Holiday Season

Our vacation rail experts make it easy for your dream cross-country train trip starting from your...