Take the Train to Cherry Blossom Season in Washington, DC! 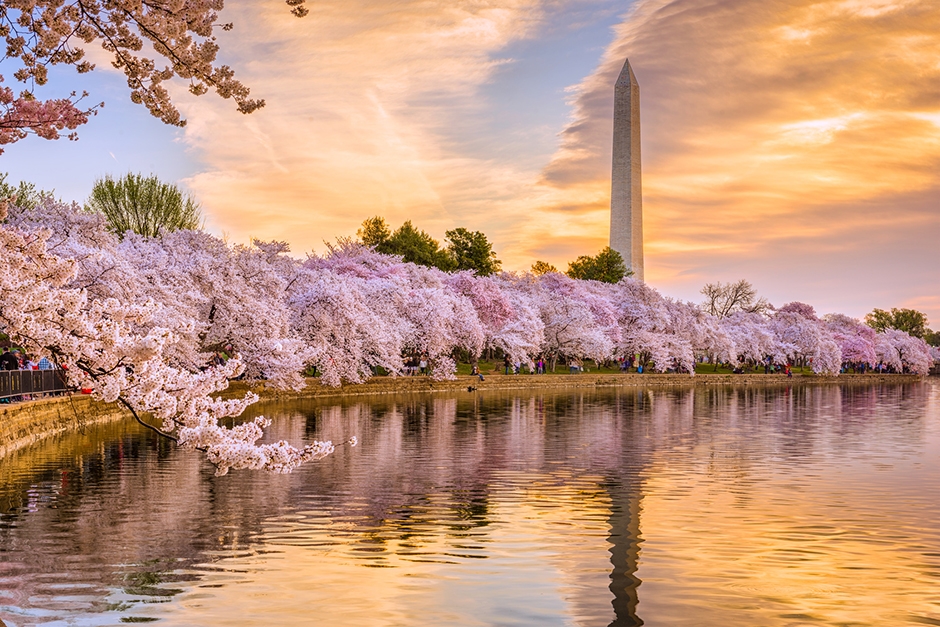 It’s that time of year again when Washington, DC comes alive in cheerful shades of pink and white, marking the onset of spring and a time of renewal and celebration in the nation’s capital. The city’s annual cherry blossom season is just about in full bloom, with experts predicting the peak to occur between March 20 and April 13, culminating with the National Cherry Blossom Festival Parade on April 13. But the festive trees bloom throughout the spring around the city, making the entire season a wonderful time to visit. The District of Columbia features one of the largest collections of cherry blossom trees in the country. In 1912, 3,000 Yoshino cherry blossom trees were given to the city by Japan as a gesture of lasting friendship and peace. Many of these original trees were planted around the Tidal Basin near the Jefferson Memorial, adjacent to the National Mall. Taking the train to Washington, DC through the month of April is made even more special because Amtrak’s Union Station acts as annual headquarters for the National Cherry Blossom Festival, offering special events and official merchandise to visitors all month long. The station is centrally located in downtown DC, within walking distance to hotels and many of the most popular of the city’s landmarks. In addition to the Cherry Blossom Festival, Washington DC plays host to a wide range of events and festivals throughout the spring, offering something for every traveler!

Capture all of the excitement, history, and adventure in our nation's capital on this Ultimate Getaway! From the countless monuments and sights along the Washington Mall and Pennsylvania Avenue to the many popular museums around the city, this short getaway offers something for everyone! Spend the day exploring the city, and at night tour the monuments as they are lit up to show their full glory. You will truly get a full experience during this exciting, three-night getaway!

Spend some quality time in two of America's most beloved cities - New York City and Washington, DC - on this fun train journey! Start in the Big Apple, where you will see all New York City has to offer on your multi-day hop-on, hop-off sightseeing tour, including Central Park, Times Square and Rockefeller Plaza. Then, you're off to the nation's capital for more even sightseeing! Uncover the fascinating history of our nation as you visit places like Smithsonian, the Jefferson Memorial, and the National Cathedral.

Starting off in Chicago, the Grand Rail Experience is tailor-made for anyone who wants to get the full cross-country Amtrak experience. Connecting Amtrak's top train routes across the top of the country, the Pacific Coast, Amtrak's southern route known as the Sunset Limited, and up through our Nation's Capital, this around-the-country journey is sure to please any train-buff or adventurous sight-seer.

Journey from America’s capital to the breathtaking majesty of Niagara Falls. Start in Washington, DC where you will have ample opportunity to visit one of the Smithsonian Museums, take a picture in front of the White House, and stop by the many monuments around the city. Then head up to New York City where you will visit the Empire State Building, Times Square, the 9/11 Museum and Memorial, and Central Park, among other attractions. You will also take in a classic show on Broadway! From there it is up and across the border into Canada to the majestic Niagara Falls. There you can take in the beauty of the Falls, one of the seven natural wonders of the world.

From the historic streets and neighborhoods of Boston to the gleaming monuments of the nation's capital, this patriotic trip is full of things to see and do for the entire family. Walk in the footsteps of Paul Revere, John Adams, and other Patriots of the Revolutionary Era as you walk the famous Freedom Trail, stroll through Boston Common, or visit any number of sites and attractions in Boston. Take in spectacular views of Manhattan from the Empire State building or cruise out to the Statue of Liberty in New York. See the place where the US Constitution, our Nation's founding document was brought to life in Philadelphia. Visit any number of fascinating museums or impressive monuments in Washington DC. Your American Heritage tour will be an unforgettable experience!

Celebrate Amtrak’s 50th anniversary with unforgettable train trips to some of the most scenic places...

Summer is right around the corner, and with it, the next train to your favorite city or bucket-list...