Established in 1910, Glacier National Park in Montana covers over one million acres and is home to mountains, glaciers, waterfalls, lakes, and a wonderful variety of thriving plant and animal life. Because of its vast diversity, the park is an explorer's paradise and offers something for everyone, from those seeking to enjoy breathtaking scenery from the seat of a car or boat to those wishing to get more up close and interactive with a hike, a climb, or even a glacier walk! While much is known about the popular park and its diverse inhabitants, here are 9 interesting things you may not know...

1.  MOUNTAIN GOATS ARE A SYMBOL OF THE PARK 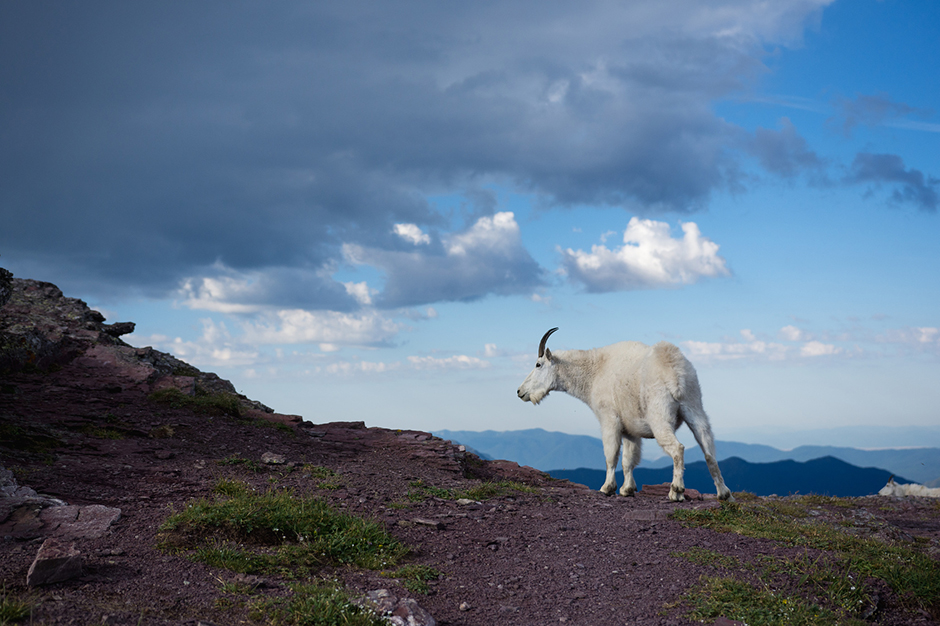 If you're visiting Glacier National Park, it won't be long before you spot the agile mountain goat, perhaps hanging out on the edge of a steep mountain cliff. The official symbol of the park due to its prevalence and perseverance in the area, the hardy animal has made a name for itself, carefully watching visitors from a safe distance or foraging for food. Their special hooves allow them to easily climb a variety of terrain, from rock to ice, with ease.

2.  'JAMMERS' ARE THE TRANSPORTATION OF CHOICE 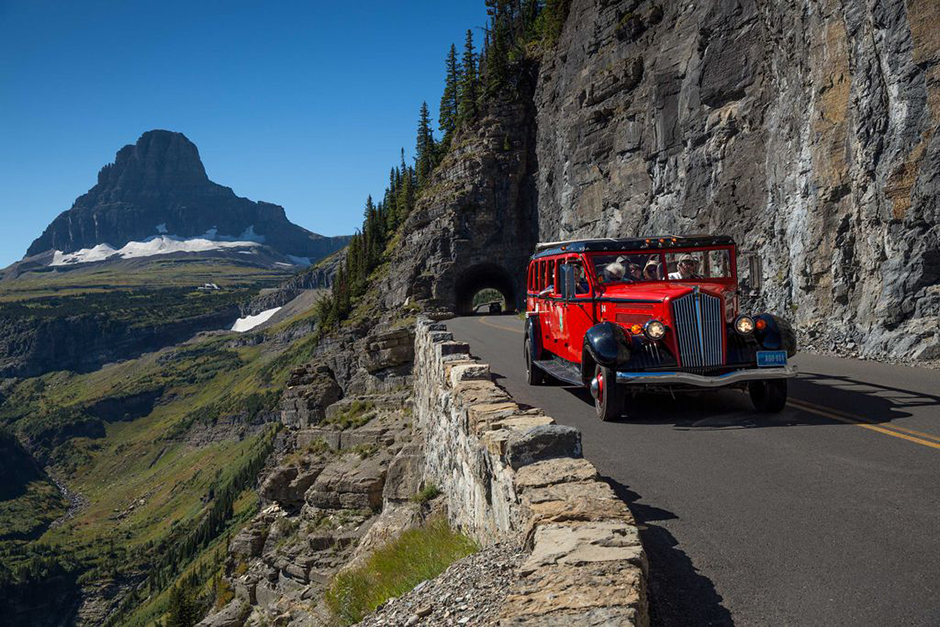 Visitors to Glacier National Park can enjoy tours of the park in style in historic red buses called 'Jammers.' Originally introduced to U.S. National Parks in the 1930s in an effort to reduce car traffic, this distinctive fleet of coach cars was restored and modified in 2002, with a number converted to run on alternative fuel. Many repeat visitors to the park say their drive along Going-to-the-Sun Road in the vintage Jammer bus with the wind in their hair was the best part!

3.  THE PARK IS HOME TO 26 GLACIERS, BUT THAT NUMBER IS SHRINKING 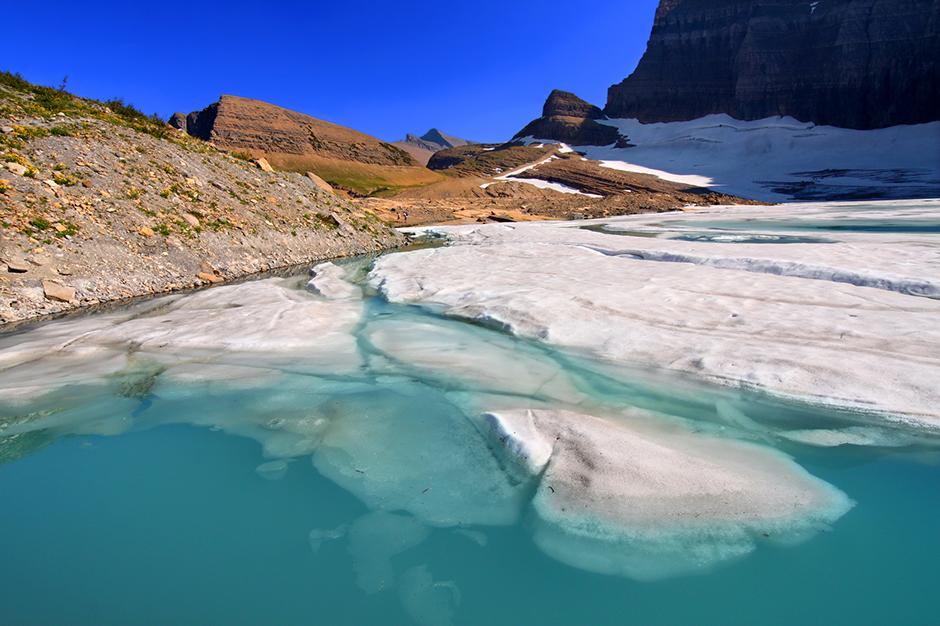 Glacier National Park is home to 26 glaciers, down from approximately 150 in 1850. That number is expected to continue its rapid decline as climate changes shrink their size, according to the US Geological Survey (USGS). Of the existing glaciers, the largest is Harrison Glacier, at 1.6 million square meters.

4.  GOING-TO-THE-SUN ROAD IS AN AWARD WINNER 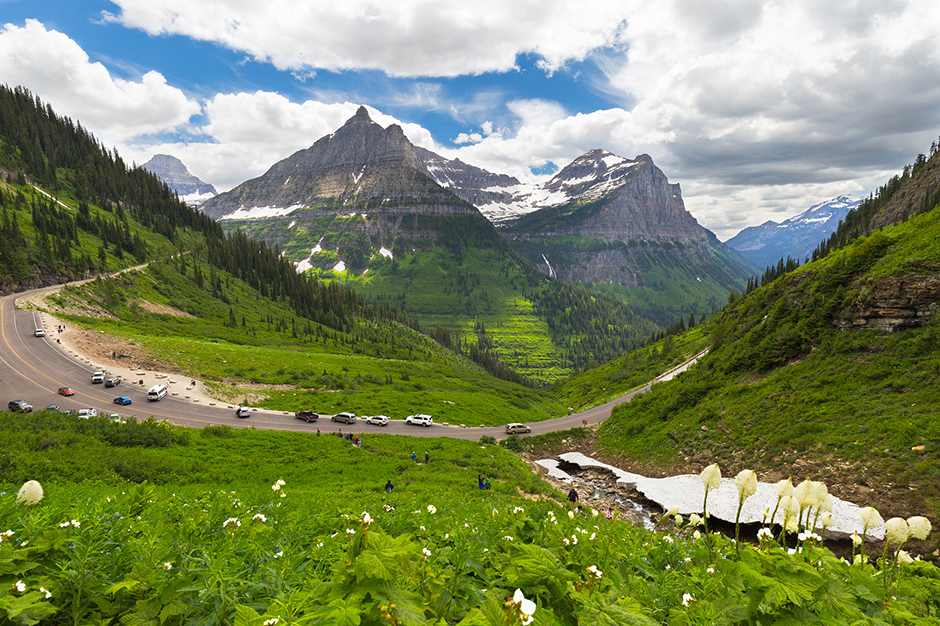 One of the most iconic stretches of land of Glacier National Park is arguably Going-to-the-Sun Road, the 53 mile-long scenic drive that opened way back in 1933 and boasts some of the most breathtaking natural views in North America. The road is famous, too, having appeared in the opening credits of the classic horror film The Shining, and having received several distinctive honors, including being registered as a National Historic Landmark, a National Historic Place, and a Historic Civil Engineering Landmark. The road crosses the Continental Divide via Logan’s Pass, which can accumulate up to 80 feet of snow in the winter.

5.  THE PARK IS WATER LOVER'S DELIGHT

There are a whopping 762 lakes in Glacier National Park, 131 of which are named. The largest lake in the park is Lake McDonald, at 9.4 miles long, 1.5 miles wide, and 464 feet deep. While Lake McDonald isn't considered a prime fishing lake, visitors flock to catch a sight of the many wild animals that live along its shore, including moose, black bears, and mule deer. The park is also home to 2,865 miles of streams, the longest of which is Upper McDonald Creek at 25.8 miles. 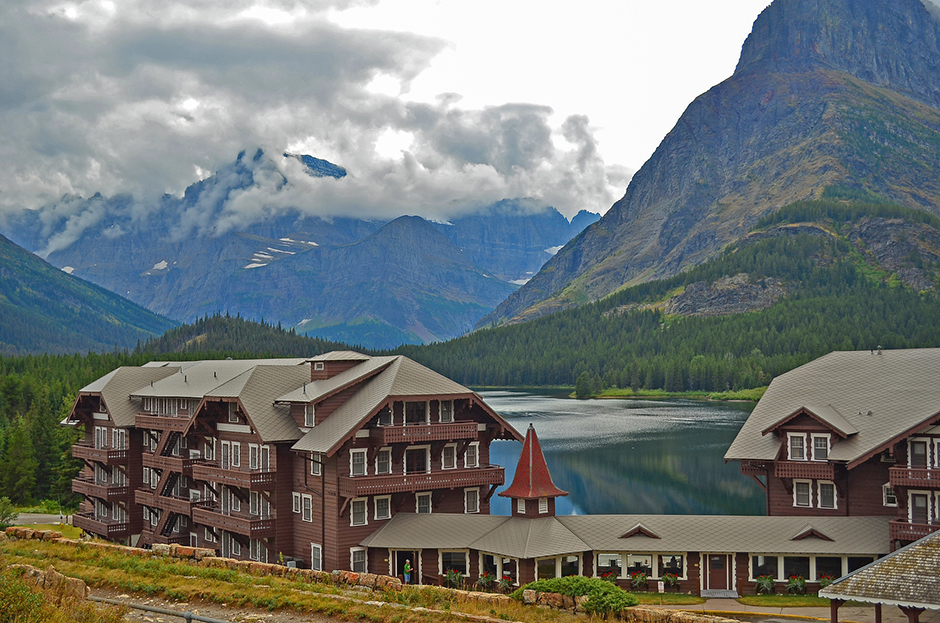 There are more than 350 structures within the boundaries of the park, including chalets, hotels, visitor centers, barracks, and more, all of which appear on the National Register of Historic Places.

7.  PLANTS AND ANIMALS ARE PLENTIFUL 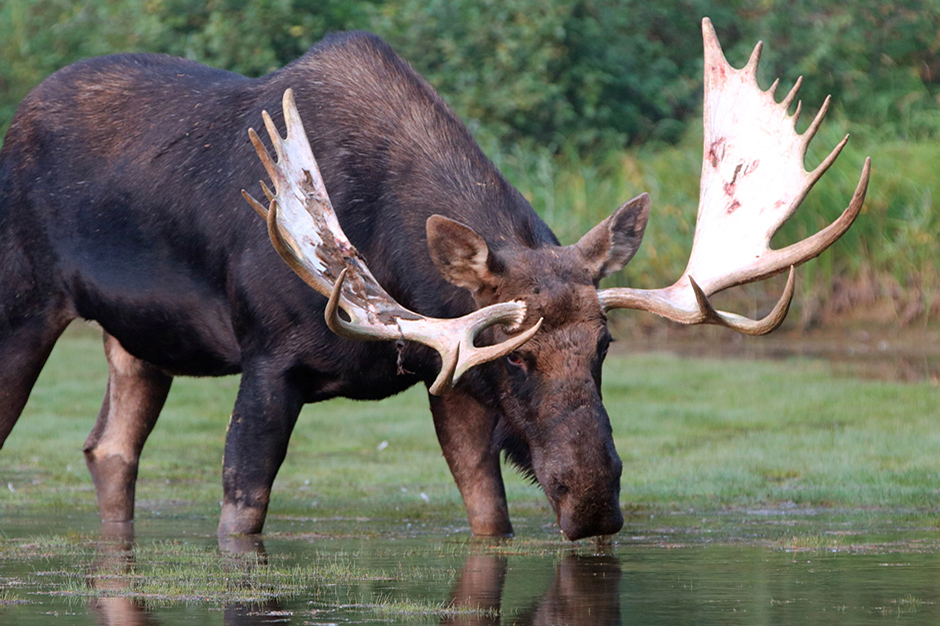 Plant and animal species thrive in Glacier National Park, with 71 species of mammals, 276 species of birds, and 1,990 total species of plants documented. Wildlife tours are popular among visitors, and sightings are frequent in the warmer spring and summer months. 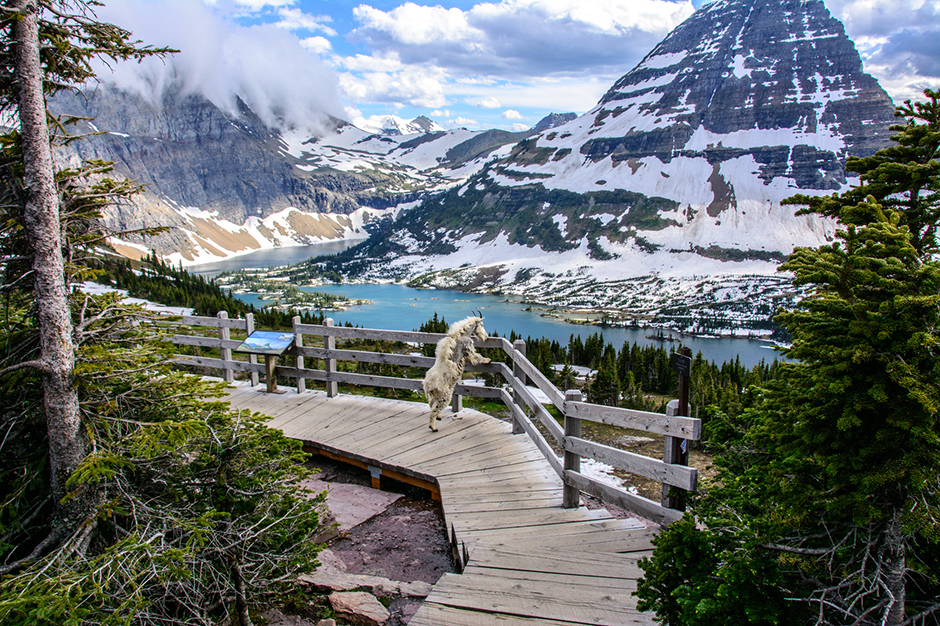 There are a total of 175 mountains in Glacier National Park, the tallest of which is Mt. Cleveland at 10,448 feet. Logan Pass, the highest point on the Going-to-the-Sun Road, located along the Continental Divide, comes in at 6,646 feet.

9.  THE TRAIN TAKES YOU TO THE PARK'S DOORSTEP 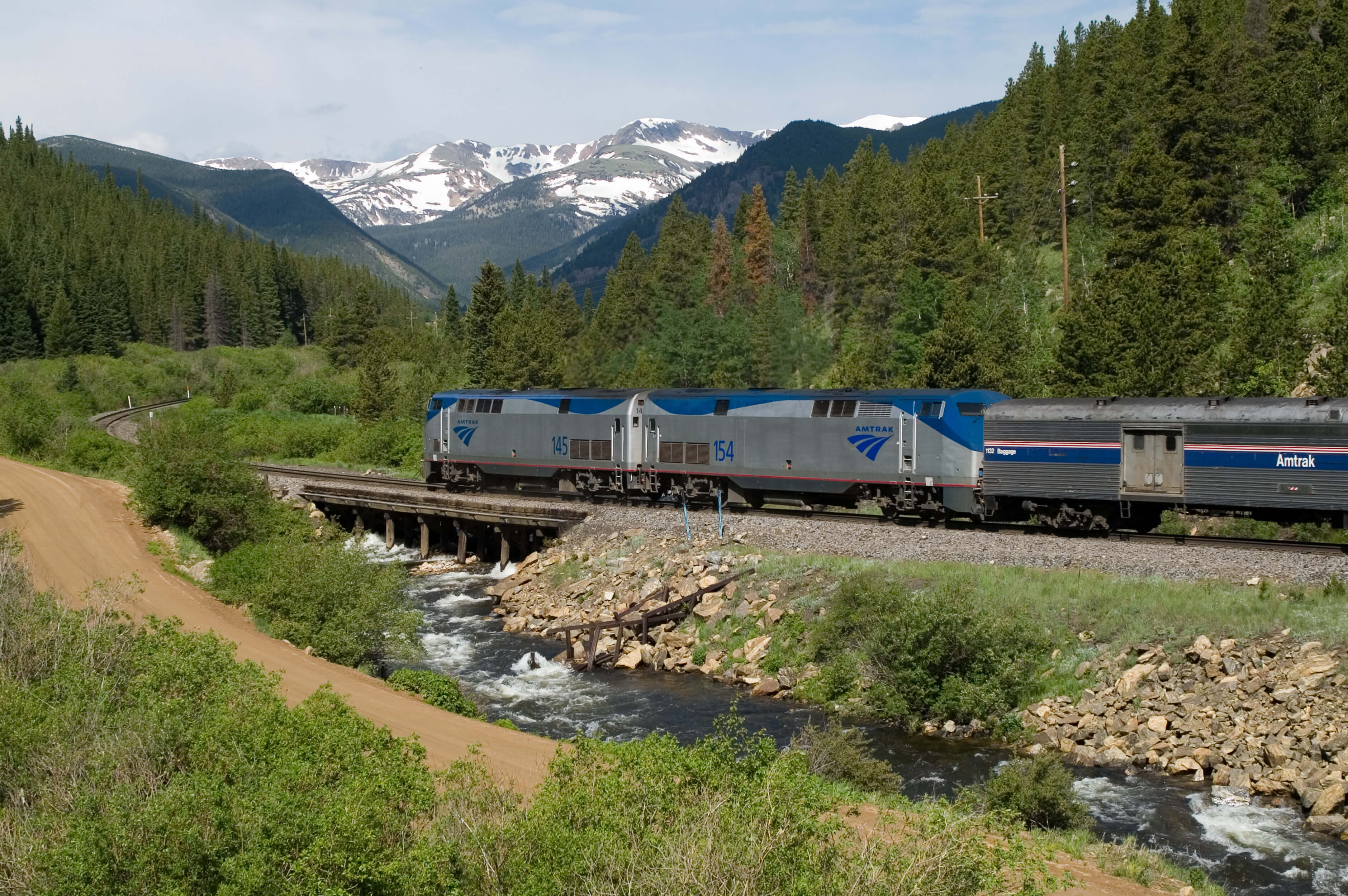 From full meals to quick snacks, we offer a variety of delicious options designed to fit your travel style with our Traditional Dining, Flexible Dining, and Café Service.

Celebrate Amtrak’s 50th anniversary with unforgettable train trips to some of the most scenic places...

What better way to kick off getting back into travel than with a cross-country Amtrak Vacations train trip!