Join our newsletter to receive an INSTANT welcome DISCOUNT!

If you’ve ever taken the train along California’s picture-perfect coastline, you know what a feast for the eyes the journey can be. With unprecedented ocean views and stops in beautiful oceanside cities like San Diego, Santa Barbara, and San Francisco, Amtrak’s routes winding along the California coast are some of the most scenic and popular in the country. Train ridership in California is up 13% over the past five years, and an estimated 95% of the population lives within 30 miles of an Amtrak station, making train travel within The Golden State an easy, convenient, and pleasant option to driving and flying. Read on to learn more about these iconic routes and discover the perfect train vacation along the California Coast! 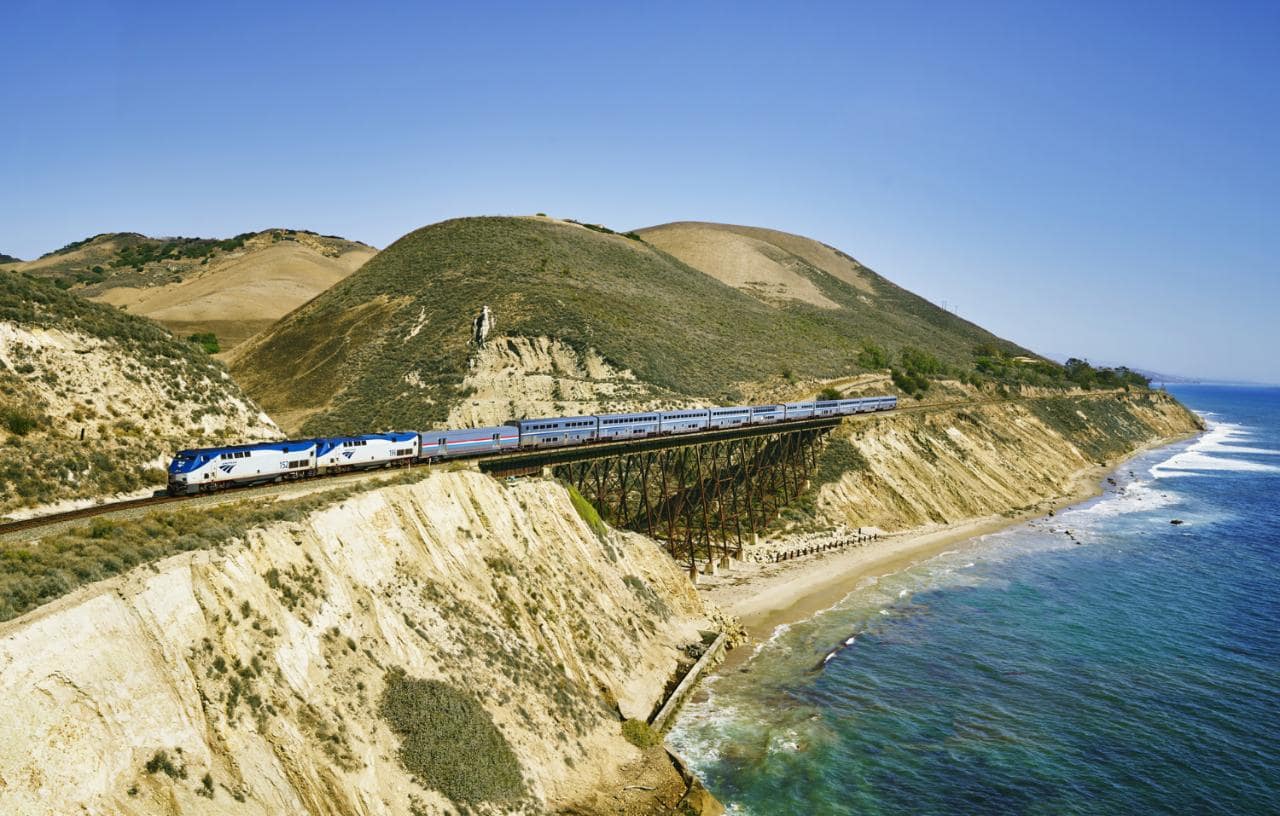 Amtrak’s Coast Starlight covers 1,377 miles of the Western U.S. in dramatic fashion, passing forests, mountains and the great Pacific Ocean. Once in California, the line travels through Sacramento, San Francisco and down the coast to Los Angeles and features both right and left side views of impressive mountain ranges, inland valleys and vineyards, and spectacular shoreline.  Head to the train’s comfortable observation car and settle in for panoramic views the entire way. Heading into Sacramento, the train crosses the American River, passes through Old Town, then crosses the Sacramento River as it heads south through the scenic towns and agriculture of San Jose, Salinas, Paso Robles, and the breathtaking cliffside ocean scenery from San Luis Obispo to Ventura. Many travelers choose to stop in idyllic Santa Barbara, also known as the “American Riviera,” for its white sand beaches, unique shopping, and local wine and food delicacies. From there, the train moves inland through the San Fernando Valley before its final stop in sunny Los Angeles. From here, many riders choose to continue the ride (and the views) further south on the Pacific Surfliner to San Diego.

This classic route hugs the California coastline and gets you up close and personal with dramatic ocean views the entire way, along with stops in the cities Southern California is known for. Particularly from Los Angeles south to San Diego, you’ll see miles of white sand, waves and if you’re lucky, whales and dolphins frolicking in the distance. Spend some time in Los Angeles before heading south to San Diego, discovering the many attractions along the way, including Disneyland.

5 Vacations That Will Make You Love Overnight Train Travel

Imagine traveling with no roads, no traffic, and no stress. Just miles and miles of natural scenery...

The mountains are calling! A visit to Glacier National Park in Montana really is a bucket list...

With so much to discover and so many unfamiliar train routes to travel, planning, and booking a bi...